"Simon helped us redesign our product from the ground up. We couldn't be happier with the result, and neither could our clients!" 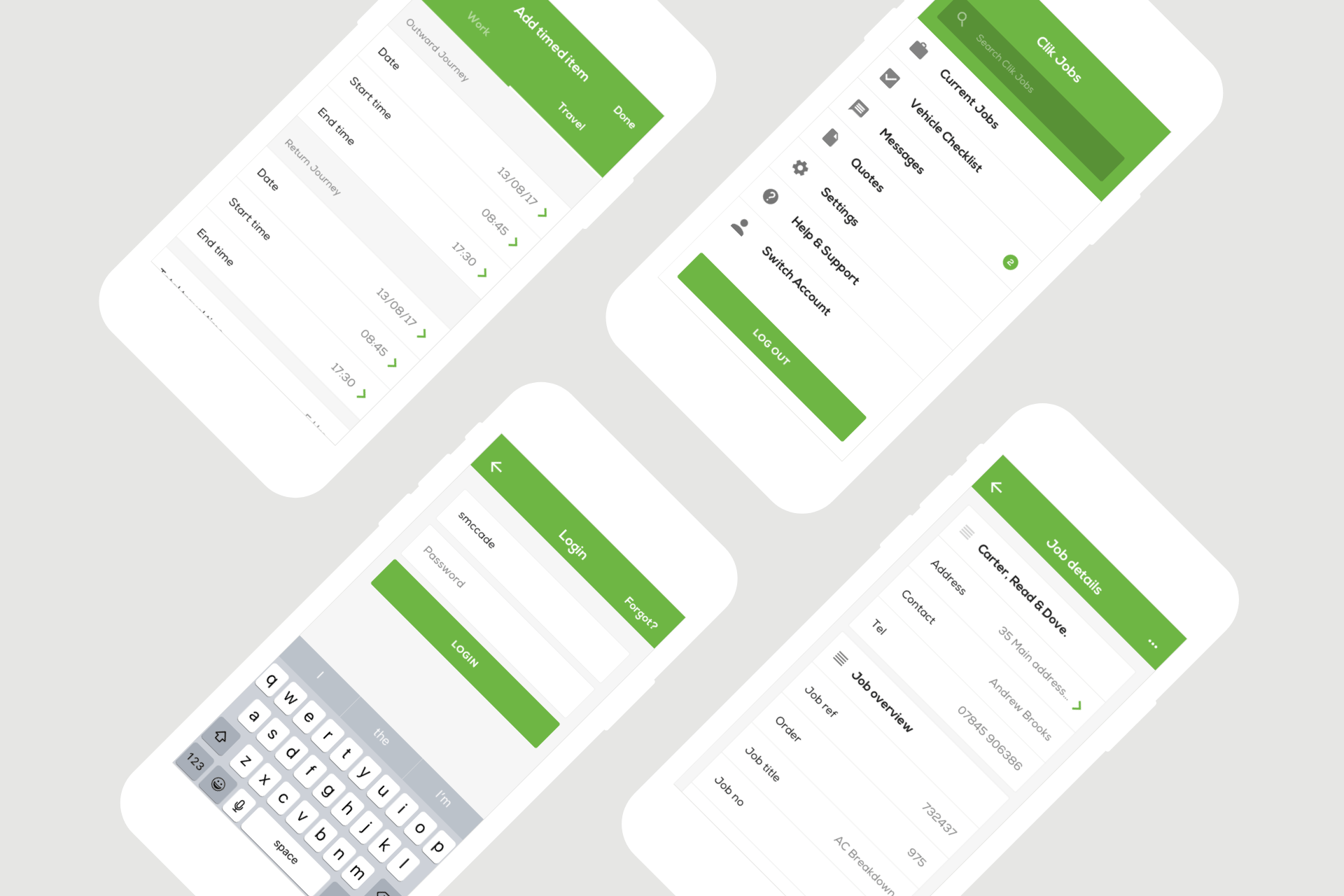 I accomplished this through designing the app to the following principles:

This was all accomplished in a short timeframe, with a limited budget.

Clik are a software company that sells mobile applications and systems for the construction and field services industries. They provide powerful, easy-to-use software to help manage field service calls, assist engineers and technicians with completing jobs, provide supervisor oversight and help everyone with administration.

Why Clik hired me as a designer

Clik lacked in-house design expertise. They wanted a designer who had experience working on mobile apps and services, with a focus on end users. They also needed someone who could work to tight timescales, flexible requirements, and who could closely collaborate with their in-house developers.

Goals for the Clik Jobs application

Clik had some clear design goals for the Clik Jobs application refresh:

It was important to balance any improvements to the app with previous development and lessons learned — this involved changing key parts of the application, together with refining the areas that were already working well.

My approach to the Clik design journey

For Clik to get the most value out of my services, it was important to break their goals and the design process down into logical steps.

Understand issues with the current app through user research

I knew that any design recommendations must both help Clik to meet their objectives and take account of existing issues and frustrations with the application. Clik carried out extensive interviews with different app users. They shared those findings with me and we completed a feedback analysis that highlighted several common problems.

The main findings and outputs were:

Evaluate the impact of issues on end users

Just understanding design issues in isolation doesn’t tell the whole story or lead to effective solutions. I worked with the Clik team and end users to evaluate how this impacted on application usage. This resulted in some authentic user stories:

Prioritise application fixes based on value to the end user

Once we had gathered a list of clear application feedback, we consolidated everything together into a clear action plan and assigned priorities to each item. This helped us decide where to focus design effort and which new features we needed to implement.

This prioritisation was based on making the app simpler and more user-friendly, and creating useful features that would enhance app engagement.

Create wireframes to allow for rapid design testing and refinement

After prioritising areas for improvement, we used wireframing to sketch out potential application and user journey improvements. This was a great visual tool to help developers understand required changes and for end users to comment on what they really needed.

Now that we had a clear idea of issues, impact on users, and potential ideas and approaches, we started making changes to the application.

These changes were based on prioritised user feedback, reactions to the wireframes, and the goals of the business.

The key changes we implemented included:

Design of a new Home screen

We divided the home screen into two sections, splitting jobs between “Newly added” and “Jobs already seen.” This added clarity and helped to reduce engineer confusion and duplication of effort.

A better user journey for creating a new job

We designed this into four clear, low-friction steps to make it much quicker and easier for engineers and others to add jobs.

New filters to make it easy to view jobs based on date, status, and categories

These sped up searching and information retrieval.

These provided at-a-glance information on one page and was a huge time-saver for end users.

We implemented visual feedback to let users know when jobs had been completed successfully.

This made it easier for users to view where their next jobs were, so they could plan a faster and more efficient route.

This allowed us to filter the most important information in a useful way to make it more accessible and focused on the engineer’s needs. This screen was also customisable to user preferences.

Users could easily track and log their time from an accessible timer. This helps to create more efficient business processes and ensures engineers are working to reasonable job lengths and quotas.

The application captures customer signatures when a job is completed, giving reassurance that jobs have been completed to the customer’s satisfaction.

The app allows engineers, managers, and others to stay in contact, effortlessly.

This made the app easier to read and interact with, improving accessibility for everyone.

We also made numerous other improvements to settings, customisation, synchronisation, and more.

The results for Clik

Clik were delighted with the new look, feel, and functionality of the Clik Jobs app. They’ve seen several major improvements including:

This project also enhanced my understanding and work with Clik including:

If you’re building or enhancing a mobile app, I can help. I bring truly user-centric design thinking, work effortlessly with your team, and help you realise the results you want.

Created a flexible and intuitive framework that closely-aligns with Clik's products and services.

Let's schedule a quick call so I can get to grips with your SaaS company and recommend the best solution.
Book Discovery Call 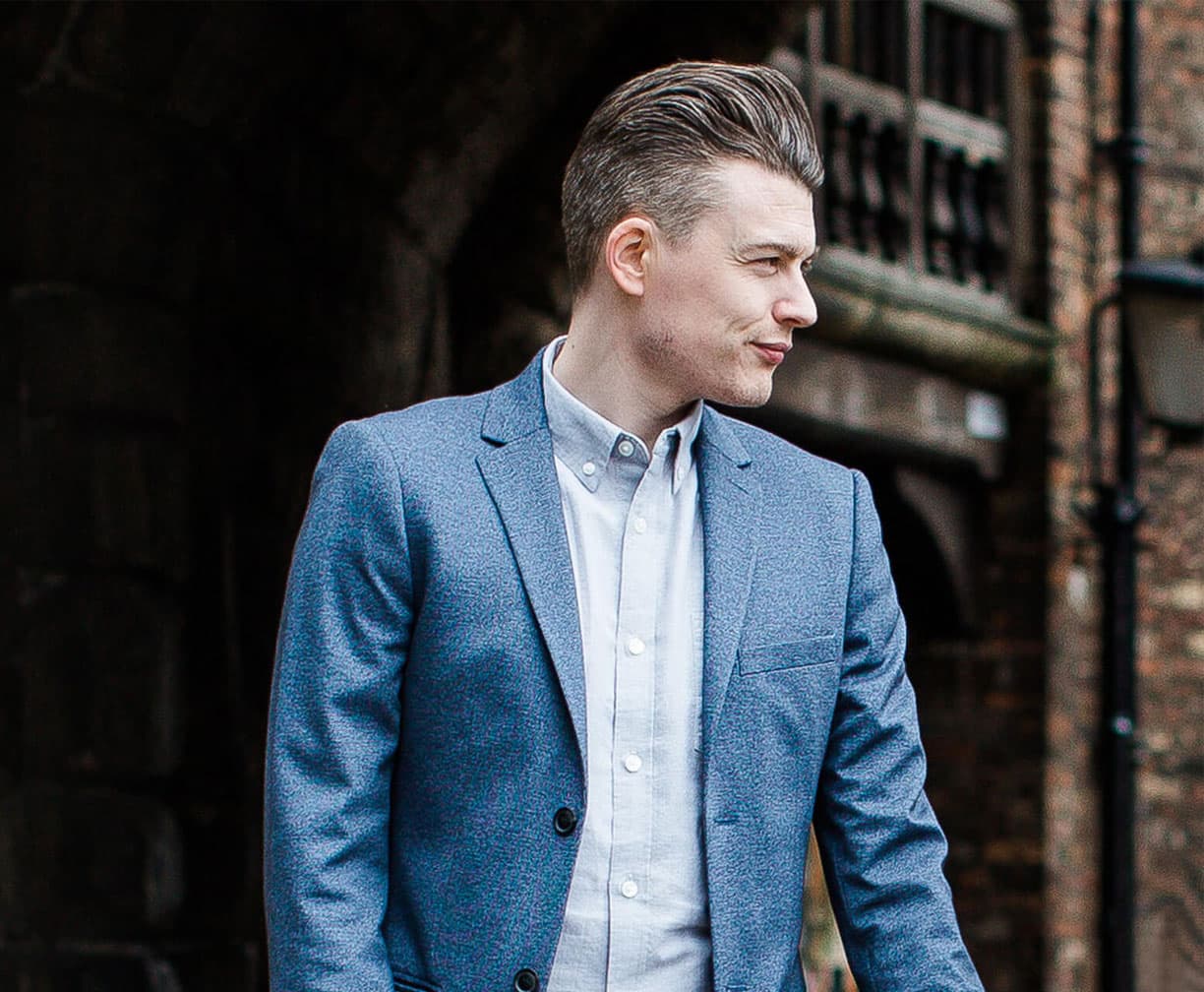