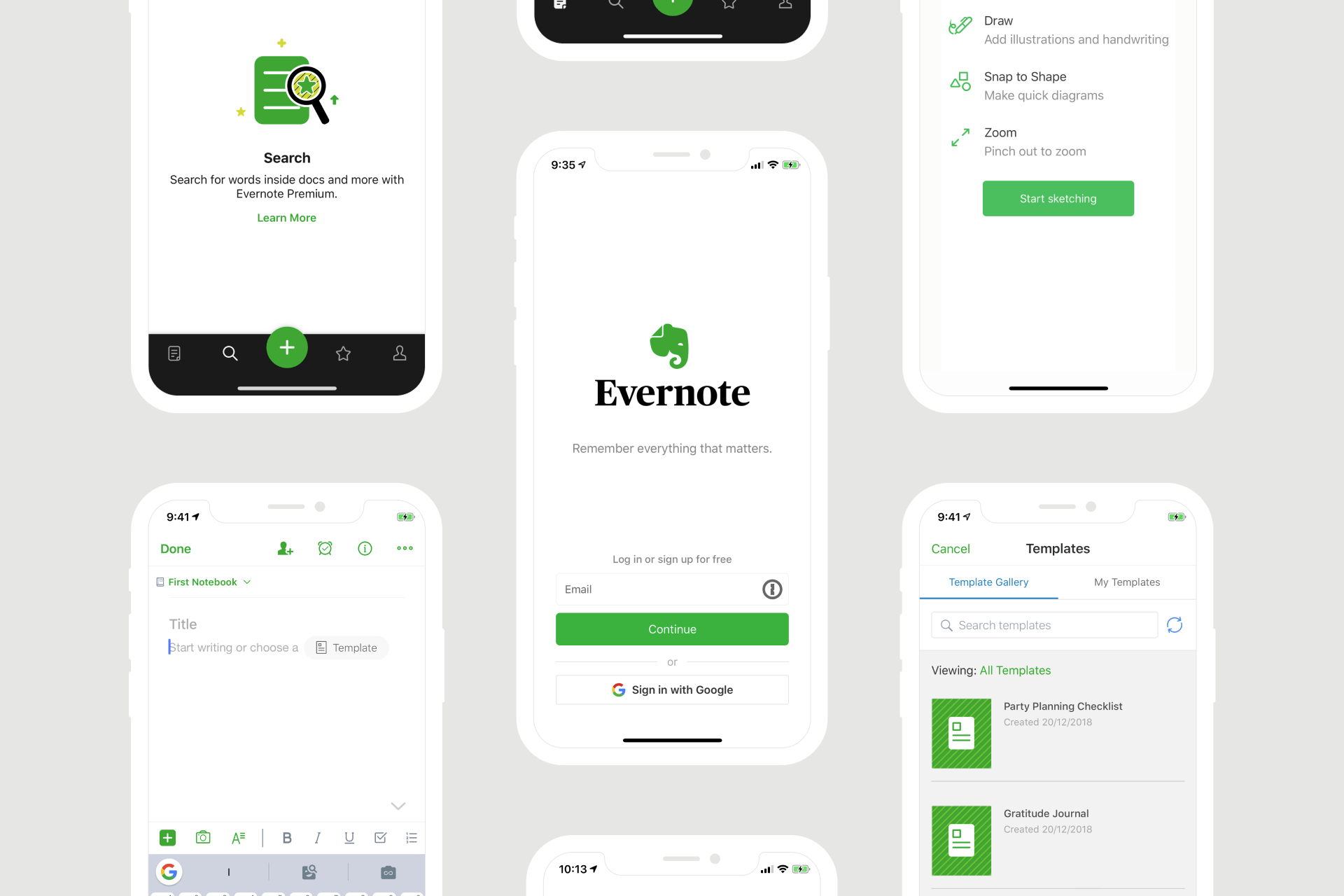 Evernote: Where less could be more

It’s fair to say that the note-taking Evernote app has been through the mill in recent times. The company carried out a rebrand in August 2018 in an attempt to refocus itself as a service and a new CEO, Ian Small, who took the hot seat in October, has publicly acknowledged the issues he needs to address this year to get things back on track - and not just from a UX and UI design perspective.

These public statements were indicative of the struggles Evernote was going through as a brand and this came to light when it had to let 15% of its workforce go and lost some top executives, too.

However, the rebrand and the new chief seem to have displayed a bit of a positive change of direction, so let’s see how it stacks up - is it still worth including in your working arsenal of tools and services or is it just a waste of time?

Does it work for its audience?

Overall reviews for the Evernote app are on the positive side in the most part - we all know they’ve been ticking the right boxes for at least some people with certain features, so expectations remain high for new users.

The whole concept is based on saving time and being productive, so it helps that the initial splash screen is clear and simple and that it’s only a matter of entering your email address to sign up. First impressions are dashed, though, when you’re asked to sign up for a Premium account there and then, which just seems daft to me. Granted, it includes a free trial, but I haven’t even had chance to use the app by this point, so it seems far too early to be asking for commitment if you’re trying to win over a new audience.

Once you get past the initial access, the onboarding for new users is straightforward and useful with its (skippable) tutorial. It’s easy to see how useful Evernote can be from this, so you can understand why it works for so many people, but the problem is that it does a bit too much and it’s difficult to get the full picture.

It might have been a better approach for the onboarding process to ask users what they want to get out of the app and what they want to achieve with it, a bit like Headspace does - this way, you’re comfortable as a new user that it’s going to work for you because you’ve got precisely the features you need and you know where to find them.

In terms of Evernote’s actual audience interest and uptake, though, the unfortunate truth of the matter is that general interest in the service has significantly depleted in the past five years - the graph below represents the interest in the United Kingdom according to Google Trends (with Evernote categorised as ‘Downloadable software’):

This is a worrying trend for Evernote’s marketing team and its ability to reach and appeal to new audiences. The same applies to the United States and Worldwide searches, too, so it’s clearly been a tumultuous few years for the Evernote team when it comes to communicating the value of the SaaS.

How does it sit in the market?

Evernote has not enjoyed the most favourable coverage in the media in recent years. Only in 2016, the general consensus in the industry was that it had spread itself too thinly and was trying to do too much at once.

The value proposition is clear from the outset - Evernote wants to position itself as the ultimate note-taking application - but it is so rich in features that it is still quite difficult to identify its most comfortable and fitting position in the market.

It feels like focusing on features like document scanners, website clippers, templates and spaces threaten to over-complicate the experience and, therefore, restrict the user’s ability to understand exactly what they want to get out of the app. More to the point, it might muddy the waters around what you actually can get out of the app if so many features are unnecessarily packed in.

It’s easy to see why people might find it overwhelming in the first instance and opt for something like Google Keep instead - there are certainly simpler options out there in the market.

The overall UX is good enough, but it’s evidently lacking in certain areas. User flows for a number of tasks need to be reevaluated - for instance, even between platforms (e.g. Mac OS X to iOS), the process of moving a note to a different notebook or adding tags to notes are completely different, which makes for a strangely disjointed experience.

There is a lack of consistency in the design language that brings the application together, so much so that the software can feel like a completely different service at times.

I expected better from Evernote and I’m sure its other users do, too.

Seamless integration into working environments is obviously what Evernote is going for here, but it’s going to seriously struggle if the overall UX isn’t nailed on for multi-device users.

How does it fit into users’ workflows?

Some aspects of Evernote feel a bit clunky and cumbersome to the point at which you find your mind wandering to different apps to complete certain tasks. The shortfalls of the UX and the occasional awkwardness of the UI mean that simple tasks in your workflow become overly complicated.

Seconds count when you want to be as productive as possible

Google Keep’s process by comparison is a one-step, clean-and-simple process that is three times more efficient than Evernote. It might not take an age to complete, but seconds count when you want to be as productive as possible, so nobody wants to go through unnecessary steps to do what they need to do. It’s more likely that you’ll find another app that does one thing and does it well.

The Evernote web clipper feature is the standout frustration for me. The simple task of taking website clippings in the app to form notes can be bloody useless at times.

It can often take the entire contents of a web page and condense them down into a single clipping, which does all sorts of unfavourable things to the formatting. This needs to be drastically improved if it is to form a smooth and ultimately productive part of the typical workflow.

Reasons to be wary

Evernote is at the point at which its users are so inclined to highlight and complain about its fallbacks that its new CEO is forced into publicly recognising the ‘long list’ of problems that must be addressed in 2019, so it’s under a brighter spotlight than ever before. It’s these kinds of issues that turn molehills into mountains if they are not sorted out as quickly as we (rightly) expect as frequent users.

Call me impatient, but we all have long to-do lists and can’t be putting up with the tools we use to work through them holding us up when they are supposed to be championing productivity. The Evernote team might have candidly declared its intentions to fix the major issues it faces, but its habit of making things over-complicated remains a reason to be wary of where it will be this time next year.

The general concept of Evernote as an application is brilliant. It’s exactly why it was flying high in its early years, but trying to do everything everywhere was quite frankly edging towards the ridiculous. If you do one thing well, which they did, why not stick to it and own it? Otherwise, the focus is lost - the team behind the UX and UI design don’t know what to focus on next and the users don’t know what they can do to get the most out of the app, so nobody wins.